JANUARY 2014
I have relocated from Berkshire to Devon. I am now based in a small village called Petrockstowe in the lovely North Devon countryside. I am near to RHS Rosemoor in Great Torrington where I spend a lot of time taking photographs through the seasons. Other gardens in this part of the world include Marwood Hill just north of Barnstaple; The Garden House in Buckland Monachorum; Tapely Park near Bideford; and Docton Mill, Clovelly Court and Hartland Abbey all in the Hartland peninsula. The North Devon coast, Dartmoor and Exmoor are within easy reach for stunning landscape views.


APRIL 2013
I exhibited at Reading Contemporary Art Fair over the weekend of 27/28 April. Thanks to everyone who visited my stand and purchased cards or pictures.


SEPTEMBER 2012
I have been accepted as a contributor to GAP Photos, the leading garden and plant picture library, and my images are now online with them.


APRIL 2012
I exhibited in the Pavilion Gallery at Chenies Manor in Buckinghamshire during April 2012, on the garden opening days. Thanks to everyone who visited. It was gratifying to hear so many positive comments and I very much enjoyed being at this lovely venue. 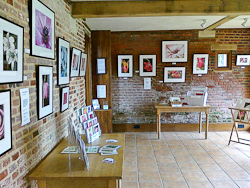 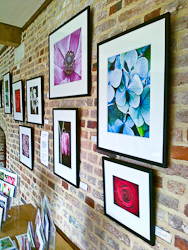 November 2011
I exhibited at Windsor Contemporary Art Fair during November 11/12/13. 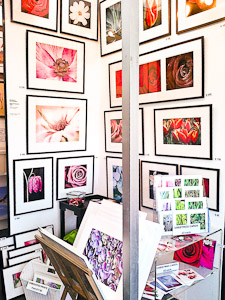 October 2011
In the run-up to the Windsor Contemporary Art Fair I was interviewed by Berkshire Media and a feature about my photography appeared in the local press.


May 2011
I exhibited at the Reading Contemporary Art Fair held on 13/14/15 May. I enjoyed meeting everyone who visited my stand, and appreciate the kind comments and purchases made. 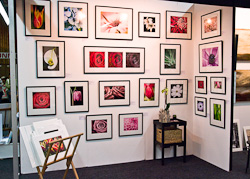 May 2010
One of my images has been used on the cover of a local magazine. 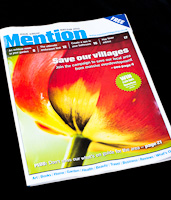 Summer 2009
Salt of the Earth, who provide a superb giclée printing service for artists and photographers, featured my work in the 'Summer Gallery' on their website. See www.salt-of-the-earth.biz (there is a 'live' link on the Links page).


February-April 2009
I was very pleased to have been invited to include some work in the new gallery at the Savill Building in Windsor Great Park for a 3-month period. This attractive new gallery exhibits a range of artwork in various media (painting, sculpture, etc.) all reflecting the broad theme of the natural world. For details of The Savill Building and The Savill Garden, see www.theroyallandscape.co.uk 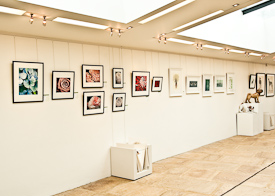 August 2008
A photograph I entered in The Royal Landscape photography competition was selected for the exhibition as a Highly Commended entry.
The competition theme was 'Architecture in Nature' and photos had to be taken within Windsor Great Park between April and July that year. The exhibition was staged at the Savill Garden Building in Windsor Great Park from 2nd September to 19th October 2009.
The photograph: Allium Rosenbachianum